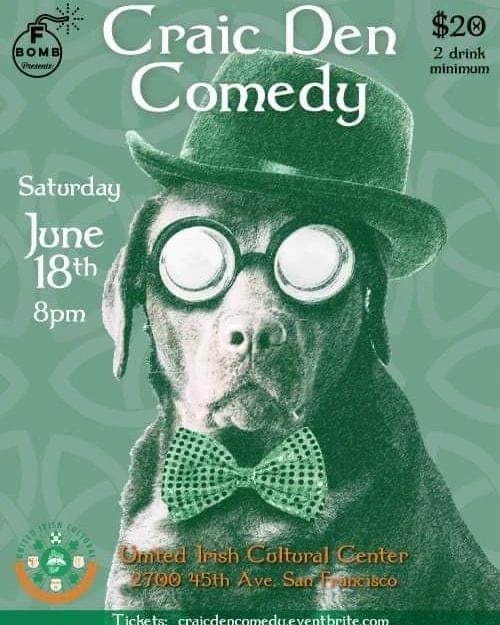 F Bomb brings the best comics in the Bay to the Sunset, so have a pint and laugh it up at the Craic Den!

Janesh Rahlan is a San Francisco based comedian. Born in New Delhi, Janesh moved to the US as a kid and grew up in the South and Midwest. He’s performed at clubs such as San Francisco Punch Line and Chicago Laugh Factory and in SF Sketchfest. His comedy touches on his immigrant background, love for music, and overall millennial nonsense.

Travis Thielen is a San Francisco based comedian and regular at the San Francisco Punch Line and Cobbs Comedy Club. He performs all around the Bay Area. In his act, he opens up about his family and personal life, mining relatable painful moments for their humor. Originally from Hawaii, he often wonders why he ever moved.

Originally from the Midwest, Emily Van Dyke loves pools and telling inappropriate stories at BBQs. Emily has performed in SF Sketchfest, she was the winner of the Walk the Plank Comedy Competition and her comedy dating show Flirting with Laughter won “Best Tinder Alternative” in San Francisco Magazine.

Zach Lord is one of the top up and coming comedians in the San Fransisco Bay Area. With appearances at clubs like Cobbs, SF Punchline, San Jose Improv and more, Zach has cemented himself as a “must see” in the Bay Area. Known for his misdirection and dark sense of humor with an “in your face” style, Zach always leaves audiences wondering what is coming next.

Marty Cunnie is a Bay native with roots in the 415 (Marin). He once got a scholarship from the UICC and has wasted that money by pursuing comedy

About this event
Everyone loves a little craic now and again, so join us in the intimate and cozy Emerald Room at the historic United Irish Cultural Center for Craic Den Comedy! F Bomb Comedy brings the best comics in town, including those featured on HBO, Netflix, Late Night, and more, while the UICC brings us the pints, and together we will have you chanting “Erin go Ha!” These tickets will definitely sell out, so get yours today!