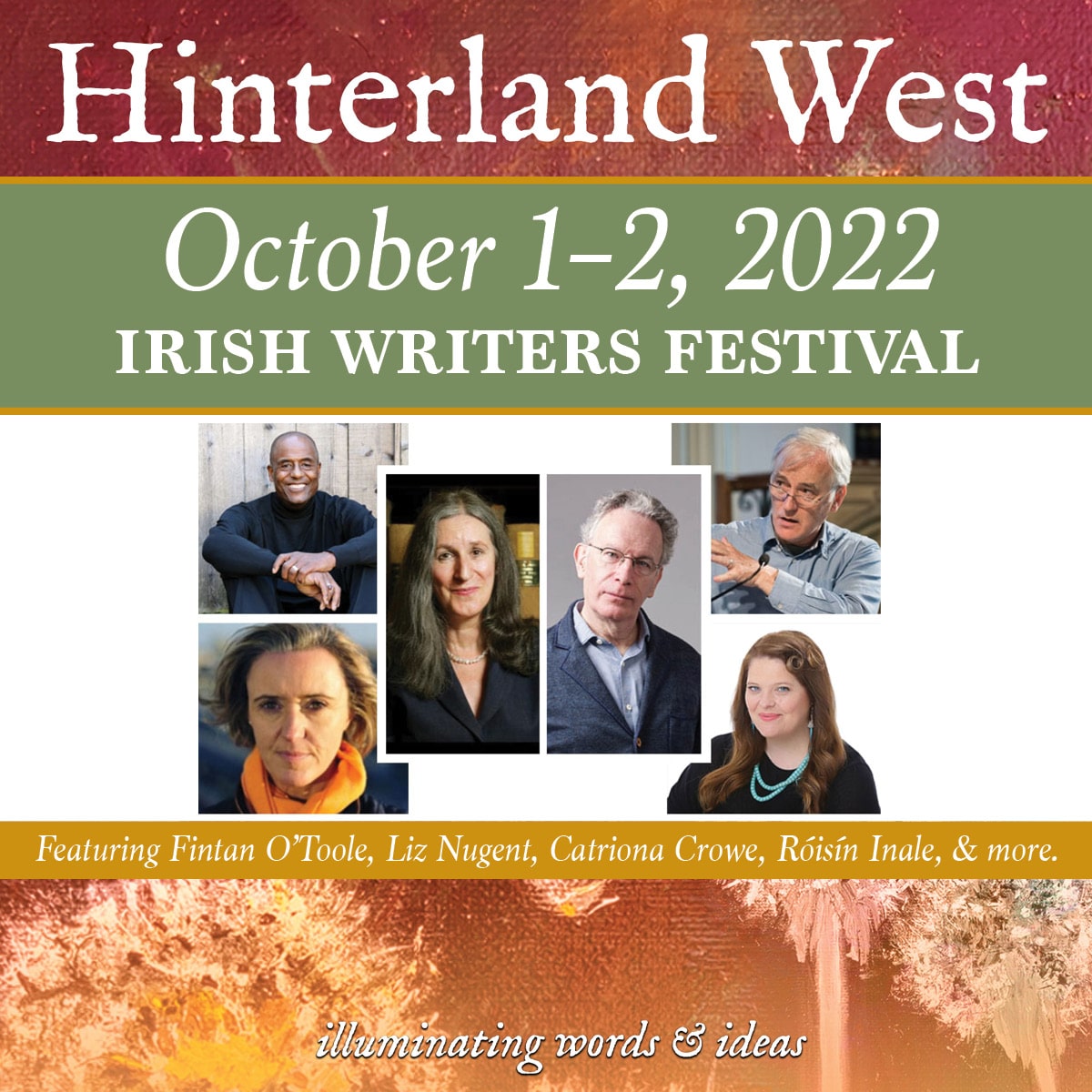 Join us for some or all of this two-day literary festival at the Irish Center featuring a compelling lineup of leading writers, thinkers, and creative talents from Ireland and the Bay Area. Hinterland West is a San Francisco-based collaboration with the Hinterland Festival in Kells, County Meath, Ireland.

12:00 – 1:00 pm: An afternoon with Percy French – Owen Gilhooly-Miles / Myles Dungan
Percy French began life as the son of an Anglo-Irish landlord shortly after the Great Famine, worked as an inspector of drains but ended his life far more beloved in Ireland than such a background would normally imply. In a career on the concert stage he wrote and sang a string of Irish classics, from ‘The Mountains of Mourne’ to ‘Come Back Paddy Reilly to Ballyjamesduff’. He will be celebrated in song by baritone Owen Gilhooly- Miles, accompanied on piano with a script written by Myles Dungan.

1:15– 2:15 pm: Liz Nugent – In Conversation with Deirdre Hurley
Only Ireland’s ‘Queen of Crimewriting’, Liz Nugent could launch a book at the start of a pandemic and still manage to turn it into a bestseller. Our Little Cruelties came into the world at the least auspicious of moments but this characteristically brilliant narrative of familial betrayal and sibling rivalry was seized on by a locked-down book-buying public and Liz had yet another huge success on her hands. She will be in conversation with Deirdre Hurley, of Hinterland/Kells.

2:30 – 3:30: Catriona Crowe – The continuing scandal of Irish Mother and Baby Homes
No Irish historian has a more intimate knowledge of the shocking and tragic narrative of these institutions, and more insight into the current controversy over the final report of the Commission of Investigation, than does former National Archives curator and archivist Catriona Crowe. Her recent article on the subject for the Dublin Review has been extensively cited and reproduced in the recent public debate on the shameful treatment, then and now, of hundreds of Irish women and their infant children.

3:45 – 4:45: Catherine Flynn – 100 years with James Joyce’s masterpiece Ulysses
James Joyce’s Ulysses is considered one of the greatest novels of the twentieth century. Catherine Flynn, one of the world’s leading Joyce scholars, will speak on her new centenary edition of Ulysses from Cambridge University Press. This important new book helps readers to understand the pleasures of this monumental work and to grapple with its challenges. The richly informative pieces discuss the novel’s plot and allusions, while also explaining crucial questions that have puzzled and tantalized readers over the last hundred years. If you have ever yearned to understand Ulysses, this is your best opportunity!

5:00 – 6:00: Fintan O’Toole – We Don’t Know Ourselves
We Don’t Know Ourselves is a very personal vision of recent Irish history from the year of Fintan O’Toole’s birth, 1958, down to the present. Ireland has changed almost out of recognition during those decades, and Fintan O’Toole’s life coincides with that arc of transformation. The book is a brilliant interweaving of memories (though this is emphatically not a memoir) and engrossing social and historical narrative. In a review in the Guardian Colm Tóibín described the book as ‘Sweeping, authoritative and profoundly intelligent’. Winner of the An Post Irish Book Awards for 2021 and #1 Bestseller.

12:00– 1:00 pm: Róisín Ingle – In conversation with Deirdre Hurley
Celebrated and rather revered Irish Times writer Róisín Ingle – a lifestyle columnist, features writer and podcaster – discusses the art of putting your life on the page. Róisín has shared hers with thousands of enthralled readers in her weekly Irish Times columns and in a number of published works, in which she covers life in the 21st century from her own unique and compelling perspective. She will be in conversation with Irish journalist and broadcaster Deirdre Hurley, of Hinterland/Kells.

1:15 – 2:15 pm: Noah Griffin – In conversation with SF’s Carl Nolte
Join us for this rare opportunity to hear two essential San Franciscans talk about their lives in the City and County of San Francisco. Noah Griffin is a true renaissance man who has worked with singers Paul Robeson, Leontyne Price and Nat ‘King’ Cole, stood alongside the Mayor of San Francisco and our United States Senator, hosted on talk radio, written a column for the Examiner, had a parallel career as a songwriter, and picked up a law degree from Harvard. He is joined on the stage by the one-and only Carl Nolte, Portrero Hill native and dean of City journalists.

2:30 – 3:30 pm: An afternoon with John McCormack – Owen Gilhooly-Miles / Myles Dungan
He was the youngest principal tenor ever to sing at Covent Garden, he filled Carnegie Hall and the 5000 seat Hippodrome in New York 12 times in one season, he coached–and rehearsed with—James Joyce, he had a taste for the high life, lost a small fortune on horses, drove a Rolls Royce, but also gave thousands to charity. John McCormack, born in County Westmeath, in his short lifetime (he died at the age of 61) was one of the most celebrated human beings on the planet. He will be celebrated in song by baritone Owen Gilhooly-Miles, accompanied on piano by with a script written by Myles Dungan.