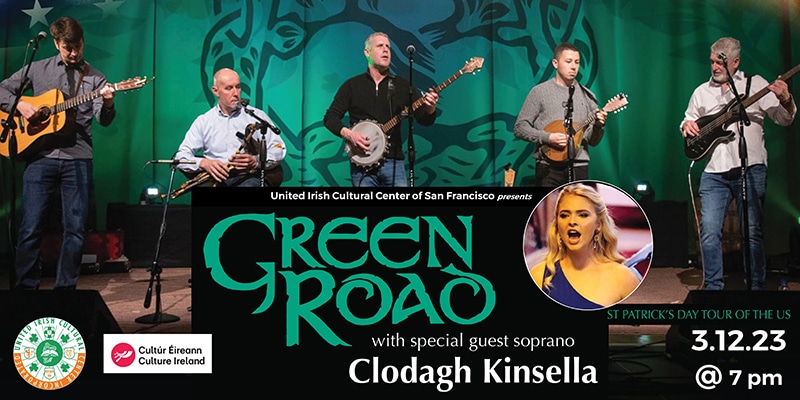 Making a stop in San Francisco on their St. Patrick’s Day tour of the U.S. this musical celebration of the close connection between Ireland and America features a ballad/folk band and soloist soprano from Co. Wexford. With Green Road’s Irish ballads and traditional music, infused with tones of Bluegrass and Americana, and soprano Clodagh Kinsella singing some of the best known Irish American Concert Hall standards made famous by tenor’s John McCormack and Frank Patterson, audiences are in for a treat.

Green Road
Green Road is a five-piece ballad and folk band from Co. Wexford playing a blend of Irish Folk favorites and traditional tunes infused with a Country and Bluegrass flavor.

The band has a wealth of experience. From the vibrant folk and ballad scene in Ireland’s pubs and clubs, traditional sessions and Fleadh competitions across the country, and theatre and television performances at home and abroad.

PJ Sinnott is one the great singers to emerge on the contemporary Folk and Ballad scene. Combined with the lively sounds of 5 String and Tenor banjos, Flat picked guitar, Mandolin, Uilleann Pipes and Whistles, Bass guitar and vocal harmonies, Green Road have forged a unique sound that will have you singing along from start to finish.