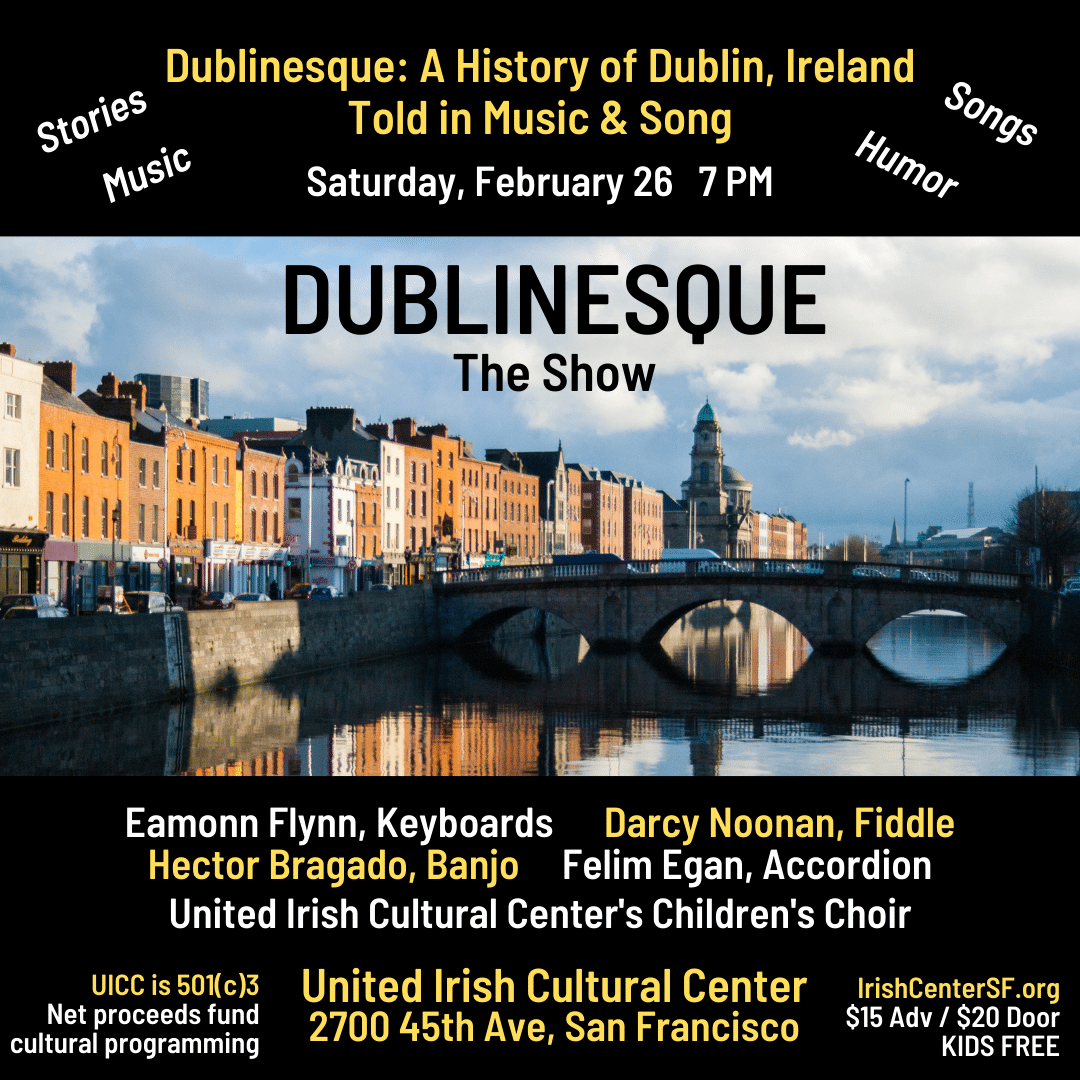 ‘Dublinesque’ by Irish singer songwriter/ pianist Eamonn Flynn Is a fascinating mix of music, songs, and stories of Dublin.
‘Dublinesque’ by Irish singer songwriter/ pianist Eamonn Flynn Is a fascinating mix of music, songs, and stories of Dublin. You will enjoy a portrait of Dublin through the years in an engaging performance rich in humour and soul.
Along with old standards and original new songs, this performance features lively instrumental tunes on fiddle, accordion, banjo and piano and takes a memorable glimpse into the past and present of Ireland’s capital. You will meet a cast of her characters through the years – from street poets to ladies of the night, rebels to street traders, the nobility to the denizens of Dublin’s infamous tenements. Through it all the indomitable spirit, pride, and wit of Dublin not only perseveres but triumphs.
The performance at San Francisco’s United Irish Cultural Center on February 26th will feature fiddle player Darcy Noonan , banjoist Hector Bragado and accordionist Felim Egan along with members of the United Irish Cultural Center’s Children’s Choir . It is also a CD release show for Eamonn Flynn’s new album ‘Anywhere But Home’ which features John Doyle, Michael McGoldrick, Mick McAuley and Athena Tergis among other Irish traditional music heavyweights. The show begins at 7pm.
About Eamonn Flynn: Dublin, Ireland born piano player, organist, composer, singer and songwriter Eamonn Flynn was the session keyboard player on the 14 million selling soundtrack of ‘The Commitments’, a film about a soul band from Dublin. After moving to San Francisco he went on to record and tour with Michael Franti and Spearhead, Evelyn Champagne King, Zigaboo Modeliste, Elvin Bishop, Coco Montoya, Michelle Shocked, Maria Muldaur, The Black Family, Finbar Furey and many more. Other film and TV work includes original music for Ugly Betty, Moonlight, Brujo, Beached and Creative High. In 2017 he released his debut solo album ‘The Irish Channel’, and followed it up with ‘Black Coddle’ in 2019. He is releasing a new album of original songs called ‘Anywhere But Home’ in February 2022: https://eamonnflynn.bandcamp.com/album/anywhere-but-home