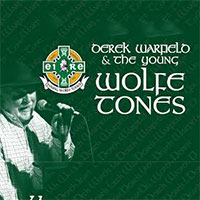 A special group of Irish men and women have been responsible for preservation of the tradition of Irish ballad singing over the past 50 years. Derek Warfield is a distinguished name among them. Derek Warfield and The Young Wolfe Tones are bringing that musical tradition forward with a reverence for Ireland’s past and the energy and optimism of a new generation of Irish musicians.

Derek Warfield & The Young Wolfe Tones are thrilled to be celebrating 10 years On the One Road and are delighted to be celebrating it in style with the release of a new CD “Boys & Girls” planned for April release, and performances all over America including some great Irish American Festivals & Venues.

“We’re presenting an old tradition in a new package – and I’ve the same passion for it now as I had when it all started 50 years ago!”

“Derek has always set high standards for his performances and this band raises the bar. The people loved them and gave them an unbelievable rousing and appreciative reception. These Young Wolfe Tones and their legendary leader were given a standing ovation.  The ‘Dublin Ohio Festival ‘were delighted to have them perform and the band were thrilled to be here, and that’s as good as it’s gets for any band.”

“Since the Old group disbanded, The Wolfe Tones’ front man and founder member Derek Warfield has hit a particularly creative streak. The impeccable versatility of ‘The Young Wolfe Tones’ propels fresh and invigorating workings of old and new numbers with masterful arrangements of songs and highly absorbing tune sets.”

“Derek has performed at festivals for The Irish Cultural Club of Florida for over twenty years and he has delivered some memorable performances with his old band. With his new band ‘The Young Wolfe Tones’ he brings a youthful and energetic passion and spirit to the music and songs of Ireland.”

“They had an audience of four thousand students singing swinging and cheering after the first song and they stayed that way for over an hour. The reaction to their music was electric!  The UCD Ball has never seen or heard anything like it.”

“Derek has long been the best front man in the country. There is no performer that can move an audience with words and song with such natural ease. His talented young band ‘The Young Wolfe Tones’ are the best ballad band in Ireland and lends an extra dimension to Irish song, music and history.”

“Ireland has lately been full of compliments to our Nobel laureate Seamus Heaney, who has just celebrated his 70th birthday. Lyric poetry is a grace, said Famous Seamus, who hails from Derry.  Quite so. But there are other kinds of poetry and when a national identity is challenged, all poetry becomes political. As you might expect, there’s no lack of it  here, and since Derek has got this fine professional group together, it’s proof there’s no lack of an audience.”

“The Young Wolfe Tones bring a youthful energy to songs like Some Say the Devil Is Dead and, Get out Ye Black and Tans I happened to be in the audience with my parents and two daughters who liken Irish music to Chinese water torture. Everyone enjoyed themselves, and it is a rare feat indeed to keep three generations of Irish people engaged.  Some say this devil is dead, but I say he would be a welcome addition to your festival.” 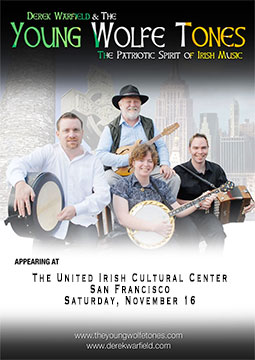 The UICC is at a Crossroads. It is a time for a bold move. It is time to think big. It is time for the. Irish Center 2025 project.