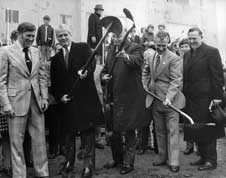 As the first Irish social center in the United States built entirely by volunteer labor and community contributions, the United Irish Cultural Center has continued the work of its predecessors (such as the Knights of the Red Branch) in promoting and preserving Irish culture in the City by the Bay.  In the early 1970s, the dream of the Bay Area Irish Community was to have a facility in which all of the clubs and organizations representing all of the Counties of Ireland could meet and enjoy their cultural heritage.  The first major step in fulfillment of this dream took place when a group of determined people met to explore the feasibility of uniting the local Irish groups into a consolidated force.  The first question was whether they could raise the necessary funds to build such a facility.  This small group decided that it could be done and they soon found that many others were willing to join in their effort to achieve the dream. 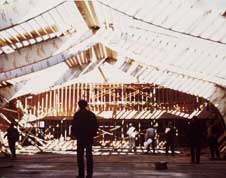 The enthusiasm of the Irish community to support the project, both financially and with their own labor, provided the foundation to formalize plans for incorporation, and the appointment of a Building Committee in April of 1971.  The name selected for the organization under the articles of incorporation was “The United Irish Cultural Center of San Francisco, Inc.”  In February of 1973, the present site was purchased and preparation of the building plans were started.

Membership drives and fundraisers continued up until – and after – the groundbreaking ceremonies of November 11, 1973.  On that date, Mayor Joseph Alioto proclaimed “It’s not just a great day for the Irish, it’s a great day for every San Franciscan.”  And he was right.  Since the UICC opened 15 months later (on March 8, 1975), it has been the center of Irish culture and activity in the City, hosting events of every kind, including weddings, ceilis, boxing, birthday parties, anniversaries, comedy shows, and concerts.  None of this could have been accomplished without the thousands of hours donated by those who built and maintained the Center for all these years.  Those individuals have provided the younger generations of Irish with a place to gather and celebrate their heritage, and their sacrifices must not be forgotten. 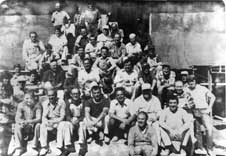 Be a part of the Irish Center story. Become a member; Frequent the bar and restaurant; Visit the Irish Center Library; Contact the UICC to host your next special event; Donate your time. Get involved in Your Center. Doing so will ensure a vibrant Irish Center for generations to come.