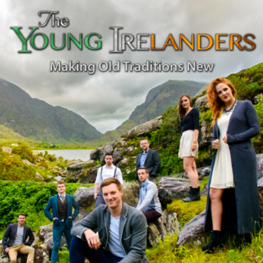 The Young Irelanders comprises eight sensational performers who have Irish traditional music, song & dance running through their veins. Although still in their 20’s and 30’s, these performers have achieved more than most people would aspire to in a lifetime.  Between them they have performed for many heads of state, Presidents of Ireland, US Presidents, the Queen of England, the President of China, Prince Albert of Monaco, Empress Michiko of Japan, performed at Radio City Music Hall, the Great Hall of the People in China, Kremlin State Palace in Moscow, the US Capitol Building, Fox Theatre in Detroit and the Pantages Theatre in L.A . The artists have also toured as lead performers with Riverdance and Michael Flatley’s Lord of the Dance, been soloists on PBS Special’s, shared the stage with Bono, and have recorded with Ronnie Wood (Rolling Stones) and been chosen by Sting to perform for his exclusive private parties.

The Young Irelanders was formed not only to merge the significant creative ideas and talents of a select group of young Irish performers who are unique amongst their peers but also in the hope that given their combined youthfulness and ability, their existence in the music business would act as a catalyst in attracting more young people to the world of traditional Irish music at home in Ireland and through out the world.

The sound the band creates is best described as eclectic, where traditional Irish music, celtic music, folk music, world music, jazz music, country music and popular music all come together to give rise to a very unique and multi-faceted sound. The Young Irelanders also sets out to reflect an Ireland of today where many of Ireland’s finest exponents of Irish traditional music are second generation Irish or reside out side of Ireland. Two such musicians and members of the group, Colin Farrell and Damien Mullane, were born in Britain to Irish emigrant parents and both have gone on to become amongst the most revered Irish  musicians in the world while they have also been drawn to these strong Irish roots and have spent many years living in Ireland.

Between them, members of The Young Irelanders, despite their youthfulness, have performed with The Chieftains, Frankie Gavin & De Dannan, Martin Hayes, Máirtín O’Connor, Lúnasa,, Michael Mc Goldrick and many more of the leading names in the Irish music business. Three of the 8 performers also hold Masters Degrees in Music. Dancer Siobhán Manson has been the principal dancer with Riverdance for 10 years now and in 2014 continues to perform this role during a 5 month long tour of China.

If you want to see and hear what Ireland’s traditions of music, song & dance look and sound like like in the hands of some of the most talented young performers in the world then don’t miss the opportunity to get to see this sensational act.