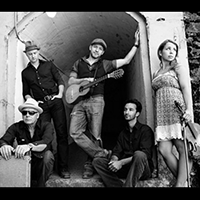 The United Irish Cultural Center is proud to announce The Paperboys will appear downstairs at The Center on our new immersive stage on The Emerald Level.   We will have a full-bar, seating on three levels and you should be ready for a great night out @ The Center!

The Paperboys are a Canadian folk music band from Vancouver that formed in 1991.The Paperboys blend Celtic folk with bluegrass, Mexican, Eastern European, African, zydeco, soul and country influences.  The band has had a variety of members and line-ups since its original formation, with Landa remaining as the sole founding member, although veteran banjoist/bassist Cam Salay often returns as a guest performer. Known for consistently creating pop songs with melodic hooks, their music has been called versatile, with a wide range of influences, melding diverse musical influences more successfully than some other Irish rock bands have previously.

The Paperboys first studio album, Late As Usual, was released on their own record label Stompy Discs in 1995. They also created Stomp Productions to produce and market their work themselves. Their first three studio albums have received Juno Award nominations, with 1997’s Molinos winning for the Roots and Traditional Album of the Year category. They also won a West Coast Music Award the same year.

Their album Postcards won a West Coast Music Award in 2000.

After the untimely death of drummer Paul Lawton, The Paperboys helped to finance a scholarship in his name.  The band has also appeared in and scored award-winning international films. They are noted for their version of Bob Dylan’s “All Along the Watchtower”, which was part of a tribute album for Dylan’s 60th birthday. Their most recent release, and seventh album, was 2014’s At Peace With One’s Ghosts.

A staple at folk, roots, and bluegrass festivals in North America and Europe, The Paperboys have extensively toured both continents, performing in England, Germany, Switzerland, Norway, Scotland, Ireland, France, and Austria. Frequently featured on Canadian national television, The Paperboys have said in the past, “We get paid for the travel time, but play for free.”