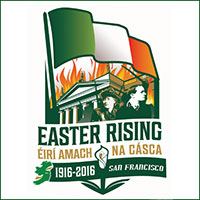 “Irishmen and Irishwomen: In the name of God and of dead generations from which she receives her old tradition of nationhood. Ireland, through us, summons her children to her flag and strikes for her freedom.”

One hundred years ago on  April 24, 1916, Padraig Pearse stood on the steps of the GPO in Dublin and read these stirring words-the first lines of the Proclamation of the Irish Republic-setting off a chain reaction which ended with the formation of the Republic of Ireland. The signatories of the Proclamation knew that they were risking their liberty and indeed their lives by signing the proclamation and by militarily taking on the might of the British Empire.  They were correct in this assumption-holding out for 6 days, all were executed in the month following their defeat.  Their executions sparked outrage in the Irish people and enflamed the patriotic fervor which eventually lead to the War of Independence, the establishment of the Irish Free State and the partition of Ireland, and finally in the late 1930s the formation of the Republic from the 26 counties.

On April 24, 2016 at the United Irish Cultural Center, join the San Francisco Irish community in commemorating the heroes and heroines of the 1916 Easter Rising. We will also remember the contributions of the Irish in San Francisco who supported the cause of Irish nationalism-before and after the Rising- with “Money, Guns, and Words”. From 4:00 pm to 5:30 pm, you will have an opportunity to participate in a variety of activities throughout the building including viewing exhibits relating to the women of the Rising and exhibits relating to the reaction of the San Francisco Irish to the Rising in the St. Patrick’s room and an art show in the St. Francis room. The main program starts at 5:30 pm when the events of the Easter Rising will be chronicled in a narration read by Grania Flanagan. The narration will be followed by keynote speaker, Professor Christine Kinealy, highly regarded historian and author from Quinnipiac University.