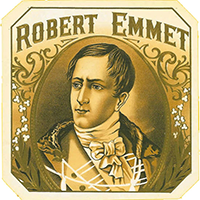 “Let no man write my epitaph: for as no man who knows my motives dare now vindicate them. Let them and me repose in obscurity and peace, and my tomb remain uninscribed, until other times, and other men, can do justice to my character; when my country takes her place among the nations of the earth, then, and not till then, let my epitaph be written. I have done.”     Excerpt from Robert Emmet’s Speech from the Dock

Each year the United Irish Societies of San Francisco (UIS) lays a wreath at the foot of Robert Emmet’s statue in Golden Gate Park commemorating his struggle for Irish independence and for the civil rights of disenfranchised Irish Catholics. The UIS remembers his heroism with Irish music, dance, and a recitation of his memorable Speech from Dock, which he delivered at his trial on the eve of his execution. The public is invited to attend this moving event.

One of four statues created by Jerome Connor in 1916, the figure of Robert Emmet stands outside the California Academy of Sciences building overlooking the Band Concourse in the Golden Gate Park. Donated to the Park by James D. Phelan, San Francisco mayor and son of Irish immigrants, the statue was unveiled by Eamon De Valera in July of 1919 while he was on a fundraising tour of the United States. Emmet served as an inspiration to the Irish republicans in the years leading up to 1916 uprising.