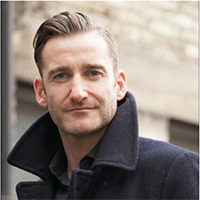 Paul Byrom is often hailed as one of Ireland’s premier tenors. The Dublin-born tenor has been in the music industry for over 20 years recording his first album “The Golden Voice” at aged 14. This has been followed by 4 orchestral album of which his last two reached no.1 on the World Billboard Charts. His talent as a singer has taken him far and wide, and some of the many highlights include performing for dignitaries such as Emperor Akihito of Japan, Former Irish President’s Mary McAleese and Mary Robinson and most recently for United States President, Barack Obama and Speaker of The House, John Boehner. Paul is an avid sports fan and performs regularly at large-scale sporting events such as six All-Ireland Finals in Croke Park and many International rugby games. Internationally, he has performed Anthems for the Pittsburgh Steelers, The Phillies, The Brooklyn Nets and Barcelona FC. He is very proud now to be a regular at TD Garden, for the Boston Celtics basketball team. In 2007 Paul became one of the original soloists in the hit show Celtic Thunder. He toured North America and Australia with the group and had six #1 World Billboard albums. Since returning to his solo work in 2010, Paul has toured North America many times and in 2013 Paul filmed his first solo TV special for Public Television called “THIS IS THE MOMENT LIVE” with his orchestra, and musical director Phil Coulter. Twice named Irish Tenor of The Year by the Irish Musical Association, Paul Byrom brings his solo show to San Francisco for the first time. This is a show for all to enjoy. With music from his homeland and beyond. This is bound to be a show you will not want to miss.

or go online to:
http://www.sfirishcenter.vbotickets.com/events