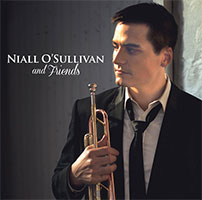 Cost: $30 Advance for Adults $10 For Under 16
Tickets: https://sfirishcenter.vbotickets.com/events

“Ireland’s Niall O’Sullivan has firmly established himself as one of the finest trumpet players of his generation. His self titled album of classical works, jazz standards, contemporary pop and traditional Irish songs entered the Classical iTunes chart at #1 in Europe, his second release ‘Ballads’ entered the Jazz iTunes chart also at #1. O’Sullivan has performed as featured soloist in both the classical and lighter repertoire with the RTÉ National Symphony Orchestra, RTÉ Concert Orchestra, Orchestra of St. Cecilia and Irish Baroque Orchestra. Niall has shared the stage with some of the biggest names in the music industry, from Tom Jones to Michael Bublé, Dionne Warwick to Perry Como. His unique ability to superbly play a variety of styles from classical to jazz, broadway to big band, shows the versatility that has gained him multitudes of fans on both sides of the Atlantic.”