ILHS: Jim Fisher, author of On the Irish Waterfront [Cancelled] 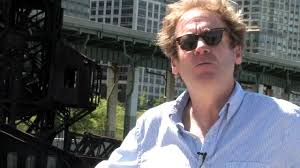 Irish American historian James T. Fisher, who will discuss his research on Irish Americans in the construction of the Panama Canal on Sunday, October 27 at 5pm at the United Irish Cultural Center, 45th Avenue and Sloat Blvd.

Fisher, is a prolific historian of Irish America, notably author of On the Irish Waterfront: The Crusader, the Movie, and the Soul of the Port of New York.

The Port of New York was the site of the world’s busiest and most lucrative harbor throughout the first half of the twentieth century. It was also the historic preserve of Irish American gangsters, politicians, longshoremen’s union leaders, and powerful Roman Catholic pastors. This is the scenario depicted to stunning effect in Elia Kazan’s On the Waterfront (1954) and into which Fisher takes readers in this remarkable and engaging historical account of the classic film’s backstory.

On the Irish Waterfront is also a detailed social history of the New York/New Jersey waterfront, from the rise of Irish American entrepreneurs and political bosses during the World War I era to the mid-1950s. The emergence of a revolutionary new mode of cargo-shipping signaled a radical reorganization of the port. This book explores the conflicts experienced and accommodations made by an insular Irish-Catholic community forced to adapt its economic, political, and religious lives to powerful forces of change both local and global in scope.

James T. Fisher is Professor of Theology and American Studies, Fordham University. He is author of Communion of Immigrants: A History of Catholics in America; Dr. America: The Lives of Thomas A. Dooley, 1927–1961, and The Catholic Counterculture in America, 1933-1962.

Members are free with a guest; otherwise $5 donation.