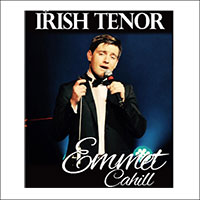 Over the past four years, Emmet Cahill’s life has been transformed from a young man pursuing a career in classical music to being plunged into the world of touring across cities and performing to thousands of fans with world renowned Irish music show Celtic Thunder. After three years of phenomenal success, including three albums shooting to Number 1 on the world billboard charts, Emmet is now preparing to carve out his own unique identity as a solo artist, and debuted his solo album last year.

Growing up in a musical household, pursuing a career in music was always a natural path for Emmet to take. From the tender age of four, his father began to provide music lessons, leading to a 5 year ‘Schola Cantorum’ music scholarship at his local secondary school. After attending formal classical training at the prestigious Royal Irish Academy of Music, Emmet soon found himself touring the world, from the United States, to Canada, to Australia as a lead singer with with the Irish music group, and relishing every moment of it.

Emmet’s talents have been recognized both home and abroad. He has enjoyed success as a multiple prize winner in various competitions across Ireland, the RIAM ‘Promising young singer of 2010’, the ‘John McCormack Young Tenor Award’, as well as being voted ‘Tenor of the year’ in 2013 by The Irish Music Association in the United States in recognition of his performances on stage. He also performed in stage productions at The National Concert Hall as well as The Gaeity Theatre, Dublin.

With the recording of his debut album next year, the next few months will be an exciting creative process for Emmet. During his time with Celtic Thunder, he has been immersed in a variety of distinct musical genres, awakening his passion for Irish music as well as other styles.

We are delighted Emmet is appearing here at the Irish Center as part of our 2016 Summer Concert Program.