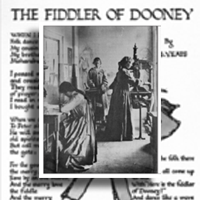 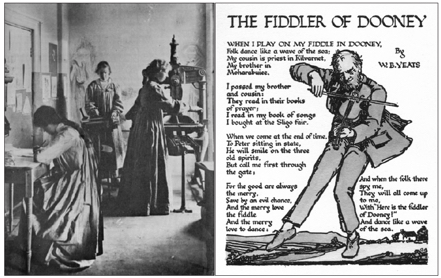 In honor of Women’s History Month, the Dowling Library is proud to sponsor: ‘Press came in pours of rain ’: Printing & Irishness at Cuala Press

Elizabeth Corbet Yeats’ journal entry for November 24, 1902, Press came in pours of rain, reads now like a harbinger of the lifelong challenges she faced in working to keep her publishing press, known first as Dun Emer and then as Cuala, alive, if not ever thriving. Yet despite family differences, daily grinding money needs and her own health challenges, Elizabeth Yeats kept the press in production for 38 years, printing over 60 books and countless cards, brochures and especially broadsides. Especially during the early years of the press, Elizabeth Yeats also examined her ideas about her own Irishness. The tumultuous years of Irish rebellion and the establish-ment of the Irish state, the development by her brother and others of the Abbey Theatre to foreground plays by Irish writers, and her brother Jack Yeats’ enduring interest in scenes of Irish culture as shown through his paintings and drawings, all influenced her personal identity as an Irish citizen. Lolly Yeats was also a publisher, a businesswoman, a printer, a painter, an employer, a daughter and a sister. This talk will explore and celebrate Elizabeth Yeats’s multiple accomplishments, and will highlight the Dowling Library’s very own copy of Cuala Press’s most famous print, The Fiddler of Dooney. Kathleen Walkup is Lovelace Family Professor of Book Art at Mills College. She has been writing and lecturing about women and print-ing since the 1980s. Her seasonal blog, New Irish Journal, chronicles her summer journeys to Ireland over the past 10 years.